Non-Laughter Reviews: WHISPERS IN THE SAND 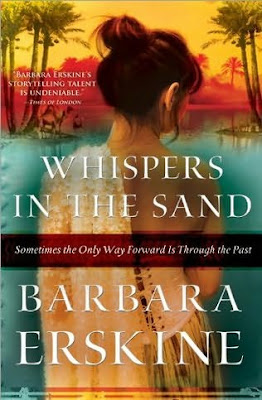 
Premise: Contemporary divorcee travels to Egypt and finds her life increasingly entwined with that of a Victorian ancestress and a mysterious ancient artefact.

Cover: Title - Creates sense of drama and is relevant to content. Art - Pretty, eyecatching colors and style of hairdo and dress captures the sense of modern with historical. Overall - well done.

What Works: The author clearly has a tremendous love for Egypt and respect for the profoundly deep sweep of its history. This attachment soaks into the story and makes the reader yearn to get on a plane to see the sights and experience that antiquity personally. At the very least, for those lacking time and travel budget (Apprentice Writer, for instance), the novel motivates to search out more historically-based fiction about the kings and queens mentioned.

AW became caught up in the life of the ancestress. A gifted painter and grieving widow, she tries to regain her physical health and emotional equilibrium by sailing along the Nile. Like her granddaughter, she is challenged to understand the secrets of the antique glass bottle in her posession, but she has the added obstacles of racism, sexism, and stifling Victorian morality rules to deal with. Her choices, and how they affect the contemporary protagonist, held AW's interest.

AW is not a huge ghost-story afficionada, but nevertheless became engrossed in the eternal-seeming power struggle between the rival priest spirits who form the mystery element of the story. What do they want from the bearer of the artefact? Are they benevolent or malevolent? Can they be released from their prison? Will they actually speak? AW could never quite figure out which was the good guy and bad guy between them - perhaps intentionally on the part of the author, to represent how no-one is ever completely innocent or guilty? - and read on more to find out what happened to them than to know what happened to the nominal heroine of the story.

What Doesn't: Warning! Mild Spoilers!
AW struggled with the protagonist. Presented as a depressed, trying-too-hard-to-please, somewhat passive character at first, it seemed logical to expect that over the course of the story arc she would grow into an empowered, active, confident character who realizes she is capable of standing on her own two feet. Didn't happen. True, she does try to tell some other characters that she does not appreciate their behavior, and does take some steps towards determining her own romantic future. Altogether, though, by the end she still spent much time being "taken care of" by a male character and AW repeatedly wanted to shake her for not grasping such basic concepts as: just because someone asks you a question doesn't mean you are compelled to provide an answer if you don't want to. And: if someone enters your living area uninvited and takes some of your property, despite your clear demand that they not do so, there are actions that you can take about it.

AW tried to figure out whether the frusrtation she felt for this character would be unique to her personal reader style, or whether it could be more broadly based. Was there truly a lack of character development on the protagonist's part? Or was it more a case of AW being used to the take-charge (sometimes with skillful violence) attitude of female protagonists found in urban fantasy novels, meaning it was unfair to expect similar backbone in characters from other types of fiction?

It was not possible for her to tease out a clear answer, partly because the waters were muddied by another factor: surprise at the multi-level open endings. Questions about the ancestress, the spirits, the hero and heroine all remained. AW tried to take this in a philosophical way, but in all honesty would have been happier to know some things more definitively rather than imagining for herself what could have happened.

She was also left with a headscratcher: at one point in the novel the protagonist learns that by virtue of their gender women have protection from ill effects of the artefact. Yet in other parts of the story, a woman dies prematurely and some families (presumably containing female members) also perish due to proximity. Any explanations the Gentle Reader can share?

Overall: The two biggest predictors for liking this novel are enjoyment of a paranormal element, and tolerance for open endings. Readers who like their fiction realistic and loose endsl tied up may be left unsatisfied. But readers who welcome a sprinkling of ghosts and who can appreciate tantalizingly unanswered questions as a symbol of the endlessness of time (without question, relevant to a place so old as Egypt) or the eternal nature of humans trying to find their true love, may well be entranced by this story.
Posted by M. at 8:39 AM 3 comments: