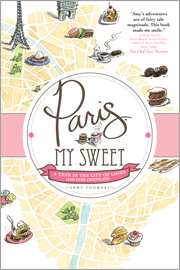 PARIS, MY SWEET:
A YEAR IN THE CITY OF LIGHT (AND DARK CHOCOLATE)
Amy Thomas
Travel Memoir
Sourcebooks, February 2012
Premise: Writer lands dream job in Paris and tracks down elite bakers and chocolate artisans in her spare time while musing on mid-thirties single life.
Cover: Title - Apt and amusing, gives a clear idea of what to expect from content. Art - the cartoony graphics of birds-eye-view of a Paris city map is highy appealing in coloration and retroish style that calls to mind the haute wrapping the equally haute edibles get wrapped in. Perhaps the best cover Apprentice Writer has seen from this publisher to date. Well done, Sourcebooks art department!
First Sentence Test: Did "I guess you could say my story began with a bicycle and some bonbons " make this reader want to continue? YES!
What Works: Like many others, advertising writer Amy Thomas was in possession of a full-on Paris crush. Unlike many others, she was handed a fairy-tale opportunity not only to live there for a year, but to work in an elegant flagship store on one of the most upscale streets. The reader immediately engages with her as she leaps at the chanc.e,happily putting herself in the author's shoes and looking forward to exploring the glittering city like no mere tourist can.

Paris has a way of making one's passions rise to the surface. For Carrie Bradshaw, another transplanted New York single girl (referenced in the text), it was designer boutiques for couture clothes. For others, it might be masterpieces in art museums, exquisite restaurant meals produced by a country that raises food preparation to a kind a religion, or city squares and architectural monuments that played a part in history.

For the author, it is all about sweets. Architecture, "regular" food and fashion are all mentioned but only in passing, as a distant backdrop to the real focus. Carrying on a habit developed in New York, she tirelessly seeks out and samples the city's best in baked goods and sweet treats. The pleasure she derives, the care with which she identifies ingredients and painstakingly developed baking techniques, the way she shows how love of exquisitely prepared food translates to the bigger picture of love of life and intensifying relationships with family and friends, all inspired AW to go on a mini sweet neighborhood exploration trip of her own.

There has a storm of recent headlines about a Food Network celebrity whose cooking involves large portions with much fat, salt, and sugar. After being diagnosed with diabetes the celebrity struck a deal to endorse a brand of diabetes medication. This seeming encouragement to eat in an unhealthy way and then profit financially from resulting poor health translated to bad optics for the celebrity.Hence the question:

Is this sweet-obsessed book a wolf in sheeps clothing, luring readers into self-destructive behavior by literally sugarcoating damaging consequences? AW is happy to report a clear "No". Yes, the author is open about her particular tastebud weakness. But throughout her time in Paris, she lives in a sixth floor walkup, travels everywhere by bicycle, and is frequently satisfied with a single, sublime bite (in contrast to the super-size portions on offer in much of North American fast food culture). Choosing tiny portions has at least as much to do astronomical prices in Paris as with self control, but the message is clear and much repeated in the text: if you want to taste all the best that bakers and chocolatiers have to offer, you must be willing to exercise a lot and know when enough is enough.

There comes a point when the honeymoon phase wears off and a some tough realities set in, both in terms of how extraordinarily difficult it is for a foreigner to crack the nut of French aloofness, and for an ongoinginly single career girl to respond sincerely and graciously to friends moving on to milestones of marriage and children. Though the author's thoughts on the impossibility of having it all aren't revolutionary, AW found them refreshing. Both in terms of her honesty, and because of her low tolerance for travel memoirs that make it seem automatic for people to go to another country and before you can say "Sacre bleu!" be surrounded by newfound friends-for-life, eating delicious food one has cooked oneself for the very first time while laughingly having the best time ever, and for good measure, stumbling upon the impossibly good-looking love of one's life (AW is looking at you, Julia Roberts in 'Eat, Pray,Love'). Newsflash: that's NOT how it happens (unless you are a Disney cartoon princess, or Julia Roberts).

What Doesn't: Fact 1: The author's sweet-based writing background (as opposed to her professional writing background) is in the blogosphere, where writing occurs in bite-sized (Ha!), frequent, of-the-minute snippets. Most of the time, blogposts are not really intended to stand the test of time and transcend the actual moment they are written in.

Fact 2: The food services industry is precarious, the restaurant and cafe business even more so. New places open and close all the time, often with a tragically short interval between the two.

These two facts combined to create a weakness: it seemed that the author didn't attempt to amplify her blog style into a more big picture style that would lend itself to longer-lasting impact, such as by emphasizing the occasions when she spoke with the actual bakers about their career and passions, the provenance of the ingredients, the process of recipe invention, etc. Those occasions where among the most enjoyable of the book. But they seemed to take a backseat to emphasizing specific business names and street addresses both in Paris and New York. The inevitable result is that the book would have an unneccesarily shortened shelf life, as the amount of attention paid to helping the reader find specific places means it grows ever more quickly out of date as the business close or move.

Think this is a petty criticism? Consider: between describing chef, bakery name, and street address in the text, plus at each end-of-chapter summary, plus city lists at end of book, some businesses details are mentioned three times. Four, if you count the illustrated maps. This struck AW as overkill.

She was also surprised by the seeming disconnect between the author's admiration for chef talent (e.g. the anecdote about industrial made croissant dough taking half an hour to prepare in contrast to one boulanger's investment of thirty-four hours for a single batch) coupled with the lengths to which she would go to obtain the end products, on the one hand, and the lack of mention of her own baking attempts. Sure, some people are better at tasting and describing than they are at producing themselves. It simply seemed that since it would be natural for someone with such a pronounced passion to give it a whirl themselves, it would be worth a bit of explanation as to why it didn't happen in this case.
Overall: A charming, easy-to-read weekend book jaunt to inspire one's own neighbourhood search for most delectable mouthfuls.
AW notes this is the second enjoyable travel memoir set in France she has reviewed for this publisher; if this is a trend, she welcomes it.

Apprentice Writer appreciates people who don't take themselves too seriously. She flat out adores readers who like a genre but can recognize the over-the-top elements in it. She got a does of both from the lovely and talented Scientist Gone Wordy, who made AW snort tea at breakfast with a link to author Jim C. Hines' reflectionss on urban fantasy/scifi cover art.
He doesn't just opine. He conducts research.
That's right. He tries to recreate cover poses.
Bravo to Mrs. Hines for having a spouse with the chutzpah to post the far-from-pretty results.
Posted by M. at 7:47 PM 2 comments: