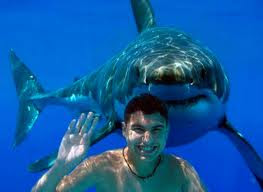 Apprentice Writer is deep in the throes (this will shortly strike the Gentle Reader as funny) of new-and-improving her query.

A query, for those who may not live in the book world, is a brief letter an aspiring author addresses to a literary agent. It is supposed to entice the agent to read the first pages of a manuscript and then hopefully sign the writer on as a client before going on to sell that manuscript to a publisher on the writer's behalf.

New-and-improving her query currently involves working through the archives of the blog Query Shark by literary agent Janet Reid. Ms. Reid routinely eviscerates (her word) the queries voluntarily sent in by hopefuls such as AW. Witnessing the dismemberment is in equal parts terrifying and educational; AW is in awe of the hapless writers who dare present their work for the shark and all the blogosphere to see.

Tucked in among the earnest efforts is the occasional spoof. AW came across one today that made her laugh so much she wanted to share. Enjoy.
Posted by M. at 10:48 AM 3 comments:

Anyone care to explain to Apprentice Writer what, exactly, this means?

In case it's helpful: it was taken from today's Groupon email attempting to entice AW with the featured deal of the day. For the curious: AW chose not to take advantage of it.
Posted by M. at 11:48 AM No comments: 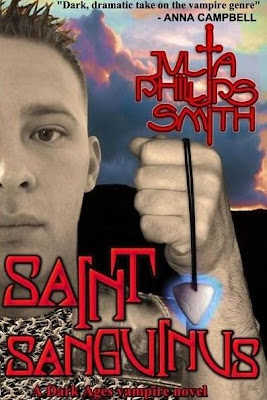 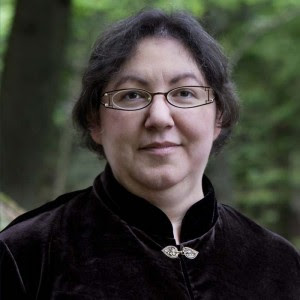 The absotively, posilutely best thing about the interwebs is discovering like-minded friends in far-off places.

Today is launch day for SAINT SANGUINUS,
the debut novel of Apprentice Writer's online amiga Julia Phillips Smith. AW is delighted to introduce this brand-spanking new author, and have the chance to pick her newly professional writerly brain.

Congratulations, Julia! First things first: the cover. Did you have input regarding art or title?

One of the pluses - or minuses depending on your point of view - of self-publishing is the amount of creative control an author has over the finished product. In traditional publishing one can fill out a style sheet and suggest things, but it's really the marketing department that has the final say as to cover art and title of the book. An author has to trust that it's in the best interests of everyone involved to produce the best cover possible, with the catchiest, stop-em-in-their tracks title, ever.

With self-publishing, it's important to pay attention to other covers currently in the marketplace. Does your genre tend to feature a hero brandishing a weapon? Does your genre currently trend toward blue covers, or red, or orange? What do the covers of the top sellers in your genre look like?

Unless you're someone with graphic design skills, I wouldn't recommend designing your own cover. Hiring a professional to do your story justice - a story into which you've likely poured your heart and soul - will result in the wonderful moment when you first gaze upon a dream come true.

As for my title, I followed the time-honored convention of naming a superhero origin story after the title character.

The title certainly is memorable! What comes to you first: hero? Heroine? Ending? One-liners?

For me, stories always come in a vision-like flash. I'll be minding my own business, and then wham! I'm deep in the midst of a dramatic sequence unfolding in my mind's eye, and I haven't the slightest clue what's going on. Who is he? Why are they doing that to him? What's going on here?

Then I have to sort out what's what, almost like stumbling into a playground fight and listening to everyone's 'He started it!'

I can honestly say no character has ever come to me in quite that way. What's your favorite scene in 'Saint Sanguinus'?

My favorite scene comes toward the end, during the big set piece. Hero in jeopardy, deep in the Black Moment - my favorite! If it was a film, it would be the part I obsessively watch over and over again. Not that I'm prone to doing that *cough, cough*

But over the years I've definitely developed a writing routine. Mon-Fri I work at my day job. So during the week I wait until evening to climb into the creativity cockpit. I'm a night owl by nature, so writing from 8:30-12:30 or sometimes 2:00am works best for me. That's when I'm really on. Even on the weekends, when theoretically I could write at any time, I still do my best writing between 8:00 pm and 2:00 am.

I love the image of climbing into the creativity cockpit. How does your family feel about you being an author?

I come from a creative background, so I've always had 100% support. No need to explain why I need to hibernate and ignore the garden, for example. Even my dog seems to encourage my scheduled time at the computer.

My garden and children don't seem to operate that way. Your best writing habit?

This has evolved directly from participating in NaNoWriMo (National Novel Writing Month - taking place right now! www.nanowrimo.org). I followed one character exclusively during the writing marathon, realizing it took too much mental rearranging to go back and forth between points of view. I then followed the heroine's POV exclusively. This helped me to realize that immersing myself wholly into the character is vital, and it's a new way of working that I'm now applying to all my stories.

I've never tried that technique before. Perhaps I should experiment! Worst writing vice?

Trying to tune into the revisions channel in my head. For the longest time, I thought it was a matter of finely tuning the same invisible dial that brought me to the story in the first place. Finally, it dawned on me that there is no revisions channel, at least not like the Generating A New Story channel that runs 24/7 in my mind.

Instead I had to get my own shiny revisions toolkit from the Put On Your Big Girl Panties store and just get on with it.

Social Networking: wolf in sheep's clothing or blessing in disguise?

Social networking is an immense, globally available, free marketing tool no writer should leave out of his or her press kit.

As a longtime blogger, I have online friendships with people all over the world. Think of attempting to spread word-of-mouth promo in countries like Australia, England, Denmark, Israel and all across the US by traditional means. This is already accomplished for me, because I have blog friends in all those places.

Nightstand Inspection! What was the last ____ you read?

That's quite the diverse lineup. Who is your writing idol and why?

Jo Beverly. She takes the time to place the reader squarely in the time and place of her historical romances, without ever slowing the pace of her stories. She never lets modern sensibilities intrude upon the historical tale she's telling. She manages to address the unromantic truths of her historic time periods without losing the shine of her happily ever after. Plus, she's a master of dialogue that carries the rhythms of real speakers, while still managing to weave story momentum within it.

Wow. I hope I write stories like Jo Beverly when I grow up. Just, like, in contemporary times and with comedy instead of historical drama and stuff.
Which literary character do you wish you'd thought of first?

Quentin Tarantino's The Bride from the "Kill Bill" series. But I'm glad he did think of such a kick-ass heroine.

You betray your roots by your choice of ultimate character from cinema instead of printed page!
Best piece of advice for aspiring writers?

The biggest thing - when you hit the point when you leave behind the infatuation stage with your own raw talent and now face the cliff-climbing phase of perfecting your craft - once you get to the top of that cliff, you will be like The Bride. You will kick ass yourself. Keep going.

I'm somewhere on that cliff now too.
How much tech know-how should one have to self-publish? Should a person like Apprentice Writer who barely manages to log on to Twitter or Facebook simply exclude that road to publication?

No, you don't have to exclude it. But you will have to be willing to pay other people to do the various aspects for you.

Self-publishing means wearing many hats, but it doesn't mean you will do every job yourself. I've hired my own little project team to prepare SAINT SANGUINUS for publication, including a graphic designer for the cover, a producer for the book trailer, a copy editor/proofreader for the manuscript and a formatter for the e-book prep.

Each book will require its own creative/technical team. Skimping on these aspects will produce an inferior product going out to readers, and I personally don't want to have my name on that.

There was a time in my life when following my dreams seemed to have turned into a colossal joke. In embracing my artistic aspirations, I had a film degree but no way to pursue that field, because unforeseen health issues made working for free - in order to collect film credits - a complete impossibility.

Obviously, even through truly soul-crushing times, I managed somehow to hold onto my original dreams. Even though I tried to keep them at arms' length, they hid in little places deep inside of me. I kept working at telling stories by learning to write novels instead of making films.

In my personal life, my husband and I managed to climb out of the financial pit in which we'd languished. The health issues continued, but over time we've learned not only how to live with them, but flourish despite them. Suddenly, planets alligned or something, because things started falling into place at a rapid rate this year.

So what I'd like to share with your readers is this. Life really does kick you in the gut sometimes. The dark part of "...it's always darkest before the dawn..." can choke you into unconsciousness. But take it from me.

DON'T give up. NEVER give up.

Thanks Julia, for showing your story so honestly.

Gentle Readers, you can purchase SAINT SANGUINUS from Amazon from 18 November.

Visit Julia at www.juliaphillipssmith.com to learn more.
Posted by M. at 7:50 PM 5 comments: