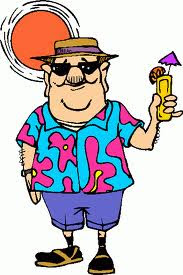 The Association of British Travel Agents published a list of most ridiculous complaints received from clients upon their return home from abroad. A few of Apprentice Writer's favorites:

"No one told us there would be fish in the sea. The children were startled."

"On my holiday in Goa, India, I was disgusted to find that almost every restaurant served curry."

"We booked an excursion to the water park, but no one told us we had to bring our swimming costumes."

"It took us nine hours to fly home from Jamaica to England. It only took the Americans three hours to get home."

"I was bitten by a mosquito. No one said they could bite."

"We bought Ray-Ban sunglasses for five Euros from a street trader, only to find out they were fake."

"The beach was too sandy."

AW applauds the British Travel Agent Association for providing such an educational report, and eagerly awaits the reports of any other national travel agent association.
Posted by M. at 8:15 AM No comments: 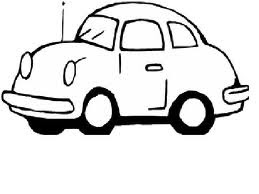 A mother and small child cross the street on foot to catch a bus and are hit by a car driven by a man who had been drinking, was on painkillers, mostly blind in one eye, and had a previous conviction for a hit-and-run accident. Result?

The mother was convicted of vehicular manslaughter of her toddler and faced the possibility of three years in prison. The car driver meanwhile served six months.

Apprentice Writer imagines that in most places, reaction would be atomic level "WHAT?????"

In Marietta, Georgia, USA, where this story took place, however, this astonishing end result apparently makes sense (at least, to the members of that jury). Looking a little deeper into the situation creates greater unease: the mother and son were black, as are most of the public transportation users in the town described as mostly white and affluent. She was convicted by an all-white jury who held her accountable for not crossing at a designated crosswalk thus "causing" the death. The saving grace was that the judge ultimately transformed her sentence to community service and payment of a fine rather than actual jail time.

AW's thoughts: There is a scene in the old Eddie Murphy movie "Beverley Hills Cop" when the hero is thrown through a plate glass window of a skyscraper lobby by security guards and subsequently arrested by police. When he incredulously asks why, they state that he is accused of trespassing. He is so astonished at the backwardness of this, feeling that he is the clear victim rather than the perpetrator, that he goes on to ask whether a person struck by a car in that town would be arrested for jaywalking.

In the movie, the scene was played for laughs because of the blatant absurdity of the situation. It is chilling to see a true life scenario turn out this way. Has car culture really reached such a level that pedestrians are not only viewed as "the enemy" to drivers, but considered to bear the lion's share of responsibility to ensure that they don't get in the way of "rightful" users of the road (no matter how physically or chemically impaired)? Is this some new variation of social Darwinism, where it is considered someone's own fault if they don't have the means to own a car and that's that?

AW hopes not. She also hopes that this case could become a catalyst for people not just in Marietta to take a look at the economic and ecological cost of getting around in daily life and take action that promotes transportation in a more co-operative rather than confrontational way. Because discouraging rather than encouraging use of public transportation and forms of healthy transport like walking or biking? Is so five steps backward. Especially at time when greenhouse gases and lack of exercise are at crisis levels.

True Story #2: A woman gets in a car, drives to school to drop off her child, swings by the grocery store, and is arrested.

It must have been a stolen car, right? Or she was driving erratically and endangering others? Or didn't have the right papers with her?

Incorrect. It was her family's vehicle, she had a licence, and followed traffic rules. So what did she do wrong? Be born female.

Once again, cue the atomic level "WHAT????" from most places.

In Saudi Arabia, however, where this story took place, this astonishing end result apparently makes sense (at least, to the lawmakers). Manal al-Sharif, a Rosa Parks of sorts, chose to make herself a lightning rod for the rights of women to drive themselves, and posted video of herself defying the ban of female driving to Youtube. This has launched a mini Saudi Arab spring of other women in that country doing likewise, with outrage and threats poured upon them as a result for supposedly threatening Saudi culture, traditions, and morals.

AW's thoughts: Are Saudi men truly such fragile flowers that their self-worth is threatened by a woman going to the grocery store herself? Seriously. How is something so banal emasculating or interpretable as an attack on the superstructure of an entire culture?

It isn't, of course, as is proven by the multitude of countries where women have been driving for generations without the existing culture falling down around everyone's ears. AW hopes that as evidence of the non-catastrophic results of women driving builds, laws will come to reflect that.
Bravo to the women of Saudi who decided that enough was enough, and put themselves forward to create progress for themselves and the next generation.
Posted by M. at 8:53 AM 2 comments: 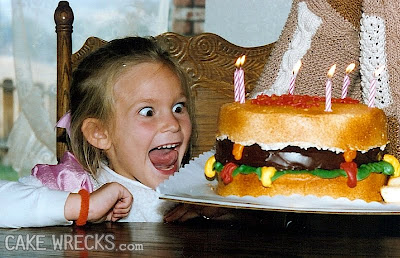 Laughter boosts the immune system. Today an image of what parents hope, year after futile year, their children will look like at the thought of school starting the next day.

courtesy of www.cakewrecks.com
Posted by M. at 5:47 PM No comments: