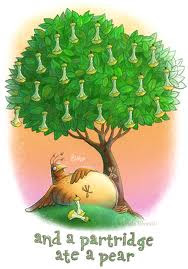 In this corner of the world, it is currently impossible to avoid game fowl attached to fruit crops. Sometimes, this alternates with spinning dreidel type music; Apprentice Writer has yet to hear any Divali or Kwanzaa music on the radio. Partridge-bearing pear trees dominate.

They also beg the question: what kind of person really thinks it's a good idea to prove his true love with a hen that speaks French or men in a hop/skip/jump competition?

Today, alternate suggestions from a trio of Canadians.

From Antonia Zerbisias, columnist with the Toronto Star :

"On the 12th day of Christmas, my true love gave to me,
A penthouse apartment,
A driver and a Beamer,
10 Botox treatments,
9 spa vacations,
8 maids a-cleaning,
7 Prada outfits,
6 Manohlo Blahniks,
more closet space,
4 Cartier watches,
3 French dinners,
2 Hermes scarves,
And a pug in a purse Gucci!"

If Antonia's tastes are too elevated, there is always Bob & Doug McKenzie (aka Rick Moranis and Dave Thomas of SCTV):

In Apprentice Writer's house, that would be a root beer.

If this is the season for the Gentle Reader to celebrate: many happy returns, and AW wishes you your preferred gifts, feathers included or not.
Posted by M. at 8:34 AM No comments: 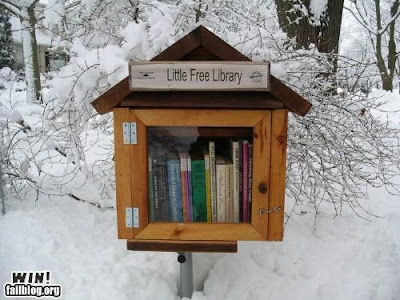 There are two kinds of people in world: those who are passionate about books, and everyone else.

Of the passionate group, there are also two kinds: those who pull back with glum sigh when bookdom is threatened, and those who take up (symbolic) arms in defence.

Mr. Bill Wrigley of Toronto is an engineer and bridge builder by profession, who appears to hold the motto, "When the going gets tough, the tough get building!"

In an early instance of toughness, he regarded his wife's 3000+ mysteries and apparently concluded that a bookshelf probably wouldn't do. Rather than harping on her to dissolve the collection, he built her a reading room with such features as secret doors and a button on one volume's spine which ignites the fireplace when pressed.

Apprentice Writer would have adored Mr. Wrigley for that alone. But!

He has now gone on to new heights of heroism. How, the Gentle Reader may ask?

Toronto currently has a mayor who won the election by promising to "Stop the Gravytrain" (i.e. eliminate wasteful spending at city hall). Once elected, he found there was surprisingly little actual gravy on the train. In order to fulfill election promises, he has embarked on an in-depth examination of city expenditure with a view to cutting/selling.

One of the culling candidates is the city library service, with some branches projected for outright closure and others "merely" looking at limitations like weekend closures (when user numbers have traditionally been highest). When literary giant Margaret Atwood protested, the mayor famously stated that he would probably not recognize her on the street.

Many Torontonians responded by forming unfavorable conclusions about a holder of Canadian public office who didn't know who Margaret Atwood is. Mr. Wrigley did something much more useful: he built a Little Free Library on his street.

It is open 24/7, operates on the principle of take one, leave one, and is carefully stocked with items that appeal to various age groups. It had its grand opening celebration this past weekend.

Bravo, Mr. Wrigley, for this gem of an example of "Deeds, not Words", and for making your neighborhood more interactive and neighborhoody. Apprentice Writer hopes that in future there will be friendly competitions of who can build the most architecturally interesting Little Free Library in their town.
Posted by M. at 12:31 PM 1 comment: