From "Wicked Appetite", Janet Evanovich, 2010, p. 1
"I graduated (from culinary arts school) in the top ninety-three percent of my class, and I would have graduated higher, but I flunked in gravy. My gravy had lumps in it, and that pretty much sums up my life so far. Not that it's been all bad; more that it hasn't been entirely smooth."
Apprentice Writer thinks this is an excellent little bit of opening characterization. The summary skillfully depicts the protagonist as "Average Girl Next Door", with neither an especially privileged nor deprived background. The choice of gravy, of all the thousands of potential foodstuffs available, is a brilliant metaphor to reinforce the Everywoman concept. Compared to flunking, say, escargots (denotes haute cuisine) or casseroles (denotes cooking on a budget), gravy seems both middle of the road and bland. Certainly not representative of paranormal excitement or forbidden men thrill, precisely what our cupcake-baking, gravy-failing Girl Next Door is about to run into. So with this opening paragraph, the author has set the stage for upcoming dramatic tension and collision of very different worlds.
Even funnier than the gravy is "....in the top 93%". This means that only 7% of the whole class had worse marks than she did - not exactly the kind of thing one usually highlights. Gotta love a heroine with the chutzpah to draw attention to such scores.
Well done!
Posted by M. at 11:38 AM No comments: 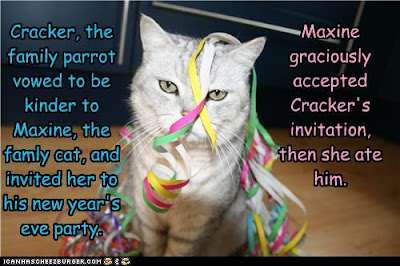 Happy New Year, Gentle Reader. May you not be eaten.
Posted by M. at 9:22 PM No comments: