There hasn't been any popcorn around here for awhile. Time for a new batch of movie reactions, minimal or more according to the Gentle Reader's preference.
Conan the Barbarian:
One: Urgh.
More: Apprentice Writer thought that any update of the Arnold Schwarzenegger atrocity would have to be an improvement. She thought wrong.
Blue Valentine
One: *sniffle*
More: So, so sad! So, so well-acted! Every moment onscreen for Ryan Gosling and Michelle Williams both is utterly believable, and utterly tragic, in this story of an everyday blue-collar couple struggling to be a family. The bewilderment and emotional pain of wife, husband, and child is so clear and so heartbreakingly everyday AW almost couldn't bear watching. She had to self-medicate with a feel-good fluffy movie immediately after.
Bridesmaids
One: Girl-Self-Empowerment
More: AW approached this warily, feeling mistrustful of the mega-accolades surrounding this female-centric comedy. Happily she did end up liking it, though she could have done without the toilet humour that seems to have made up a large part of what audiences apparently felt made the film noteworthy. She liked Kristen Wiig as the protagonist, Rose Byrne as the stealth villain, and Melissa McCarthy as the ultimate girl-self-empowerer. The character she liked best, though, was Chris O'Dowd as the police officer. This was a surprise given how much AW loathed and despised his character in "The Crimson Petal and the White". An indication of his talent as an actor, and Ms. Wiig's talent in screenwriting.
Sherlock Holmes, Game of Shadows
One: Hurray!
More: Not quite as hugely entertaining as the original, perhaps because of ginormous expectations to live up to, but still roaring good fun.
Our Idiot Brother
One: Warm-and-fuzzy.
More: Paul Rudd goes both out of character (who knew the ultimate clean-cut guy could do grunge and shleppy?) and at the same time stays even more intensively in character (the ultimate good guy who deserves happiness and to get the girl) in this comedy about family (as opposed, it should be noted, to "family comedy"). AW had some genuine laughs that outweighed the too-rushed-and-therefore-unsatisfying resolution.
No Strings Attached / Friends with Benefits
One: Snooze / Laugh
More: Two movies with the exact same premise hit the market at the same time: what are the chances? AW is interested in who stole from whom creatively purely to figure out whether the very clear loser/winner demarcation corresponds to creator/copycat roles. NSA suffers from complete lack of chemistry between the leads and complete lack of charm in the story, whereas FWB has both, and a funny little self-satirical story-in-story as icing on the cake.
What say you, Gentle Reader? Agree? Disagree? Share your popcorn views.
Posted by M. at 1:29 PM 1 comment: 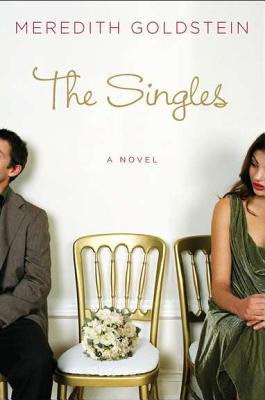 THE SINGLES
by Meredith Goldstein
Mainstream Women's Fiction
April 2012
Premise: A wedding causes five single invitees to evaluate their lives.
Cover: Title - Simple, direct, effective. Art - Very pretty and reflective of content, with the gold metallic lettering cleverly calling to mind the rings (i.e., life partners) that the novel protagonists don't have. The theme of social pressure for people to couple up literally forms the centre of attention.
Overall, well done and attractive.
First Sentence Test: "Twenty-nine-year-old bride-to-be Beth Eleanor Evans, a slender, freckled, strawberry blonde whom people called Bee because of her initials, stood in front of the whiteboard she'd purchased that day at the Target off Route 103."
Did this make AW want to read on? No
What Works: Weddings seem like a hot topic right now, fascinating to far more people than just those intending to tie the knot in the near future if the multitude of wedding reality shows and are any indication. This novel, and the earlier "Girls in White Dresses", seems to ride the wave.
Why? Why are weddings intriguing for people not directly participating? As a person who was, yes, sucked into regular viewing of one or two of those shows, please allow Apprentice Writer to voice her theory: it's the expanding effect weddings have on the psychology of onlookers. No one (at least, not in this novel) remains within their regular emotional parameters prior and during the wedding. Their highs get higher and their lows lower, and it can be tremendously addictive entertainment to have a window on what happens under those circumstances. As such, AW was sold on the premise of this book.
She enjoyed the ensemble approach, with events looked at through the eyes of multiple characters rather than just one point of view. AW also liked how each POV character had clear strengths and weaknesses; there were none who skewed heavily to the "good" or "evil" side. AW would like to think that this realistic and balanced approach has something to do with the author's background as a newspaper etiquette and advice giver, a perspective that would tend to encourage the view that a) we all have our personal issues to work through, and b) one need not ever given up on anyone completely. This is how the characters come across, and AW appreciated it.
What Doesn't: AW received an Advance Readers Copy, and therefore has no way of knowing how much of the manuscript that finally went to print may have changed and improved. That being said, the authorial style and voice didn't always entirely flow for her. Run-on sentences (as from first page, above) were not uncommon, as was a tendency to repetition: "She was blinded just a few seconds later by a vicious, almost blinding fluorescent light."
AW disliked the biological reality descriptions included in some scenes for two reasons; it seemed to her that the point could have been gotten across without going into as much detail, and also, it seemed to underline how the choices of some characters kept them at what seemed like a high school/college level rather than people moving on and establishing themselves in their professional lives. It is true that often, individuals may be moving forward in some parts of their lives while feeling as though they are stuck in others. This is a common and relatable phenomenon for many if not most readers. But characters such as the woman who accepts and swallows an unknown pill from a near stranger and then (against advice) drinks steadily without eating gets no sympathy when things start going wrong.
Overall: A slice-of-life novel about people trying to find their post-college groove and figure out the age old question of how or even whether to find a partner that manages to make the reader, whether single or partnered, feel their status is valid.
Posted by M. at 7:27 AM 1 comment: