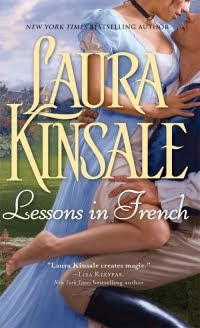 Premise:
Introverted rural heiress and disenfranchised French duke with a shared history meet again, burdened by personal and political events since their parting.

Cover:
Title - Very good. Short, memorable, relevant to content on multiple levels. Art - the trend of lady with bared leg culminating in flexed foot continues. Altogether kind of middle-of-the-road: not heinous, but not especially striking either. Was her gown supposed to be French Blue? If so, it needed more gray in the mix - however, Apprentice Writer concedes that French Blue is a hue better suited to walls than gowns.

What Works:
How much did Apprentice Writer love LIF? Let her count the ways:

1. The heroine. So introverted, yet so resourceful when the situation called for it (and boy, did the situation ever keep calling for it.) So mortified by her inexplicable thrice-jilted state, yet so shrewd in how to take the personalities of those around her into account to achieve results desired. So fixated in her self-image as a non-descript mouse, yet quietly drawing the positive regard of all who mattered (and some who didn't.) Readers who enjoyed Olivia "What Happens in London" Bevelstoke's habit of composing lists to work through her frustrations (AW certainly did) will be likewise entertained by the daydreams Callie concocts to combat feelings of impotence and anger created by the restrictions of her daily life.

2. The hero. Tormented, too charming for his own good, made almost disastrously reckless by jealousy, utterly steadfast in his own way. A fascinating mix of impulsiveness and principles. AW wants to say 'lovable' except that makes him sound like a puppy, or perhaps one of the bull calves that keep cropping up, and AW doesn't think that puppies or bull calves are as passionate or dashing as Trev. Then again, what does she know? The book is dedicated to a hound. One imagines there must be a good reason for that.

3. The secondary characters. Regular readers of this space know how important they are to AW. She was pleased with both human and animal ones. The gravely ill mother - wonderful! The antagonist - went from irredeemable to creating odd flashes of sympathy and hope that something might be done with him. The bull - loved him, though AW has never been a bovine person regardless of how unendingly cute baby Norman was in 'City Slickers'. Were all believable and uncliched.

4. The writing. It flowed so well. No spots that jarred with anachronisms, out of proportion emotion, dragging introspection, questions about the mechanics of how something just happened. And the dialogue - oh, the dialogue! AW desperately longed to have someone to talk with like that.

5. And finally, the big kahuna: The funny. AW's copy is overwhelmingly dog-eared with little gems. She will limit herself to a few:


"She had wrestled with the question (of what could be wrong with her to be jilted three times) herself. Indeed, she and her father and her sister and their acqusaintance and all the local gossips and probably two or three of the wiser village goats had spent a good deal of time dissecting the matter. No satisfactory answer had been agreed upon.

Her father had attributed it to the general decline of British Manhood into Riot and Villany. Her sister Hermione felt that Callie showed a deplorable lack of respect for the fashion in caps. The gossips largely blamed it upon Napoleon. During the French wars, they had blamed everything on Napoleon, and even five years after Waterloo he had not outlived his usefulness in that regard. The goats, being commoners, very properly kept their opinions to themselves."

And:
"...Are you a great heiress, then?"
"Well, yes," she admitted..."After the last settlement, it toted up to quite a sum."
"How much?" he asked bluntly.
"Eighty thousand," she said in a smothered voice.
"Good God."
"So you see," she said, lifting her face, "I'm hardly an object for compassion."
"May I make you the object of my violent and unrestrained ardor?" He made a motion as if to loosen his neck-cloth. "I'm a bit tired, but perfectly willing."
"My calling hours are from twelve to three, if you wish to importune me violently," Callie said, dropping a quick curtsy, "but now I must see to your mother."

And this, the phrase that will join Joanna Bourne's expression of strong emotion ("God's avenging chickens!") in AW's hall of fame:


What Doesn't;
Callie and Trev did not have sufficient foresight to provide siblings who are both alive and single, dashing the possibility of re-entering this world through their books. Perhaps some obscure cousins could pop up and provide a reunion with Callie and Trev in future pages? Perhaps Callie's sister can become a widow? Or couldn't an author of this calibre transform the antagonist into a convincing hero of his own story?

Overall:
This book is destined for the Laughter Keeper Shelf, but it will need to wait to take up its place there. First AW is going to read it again.

But does it make you laugh? YES, YES, YES!
The last time a historical made AW laugh so consistently from start to finish was when she discovered Lindsey Davis' "Falco" series of imperial Rome. Giving LIF to someone feeling down or disheartened would be humanitarian service.


COME BACK TOMORROW FOR Q & A WITH THE AUTHOR!

The Fine Print: AW received an Advance Reader's Copy from Sourcebooks - and she's so glad she did.