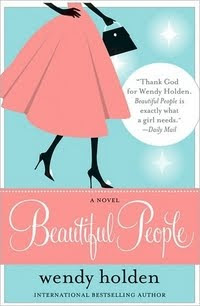 
Premise: A 'serious' British actress getting her first big commercial break, a papparazzi-loving American actress looking to find her way back into the limelight, and a down-to-earth British nanny wrestle with the question of what makes someone attractive.

Cover: Eye-catching, saturated color, classic chicklit stiletto icon, title that can be interpreted on more than one level = great cover.

What Works: Apprentice Writer doesn't recall how she first came across this author's work several years ago, but she has been an admirer of the over-the-top Britlit style ever since. The daily life dilemmas of the protagonists are so easily relatable the reader can't help but sympathize, the self-centred misbehavior of the antagonists so overblown that the reader often develops perverse affection for their delusions of grandeur. Ms. Holden's novels are great fun, and this one is no exception. She takes such glee in skewering stereotypes that one can't help but go along with it and speculate about what composite of celebrities may have inspired various novel characters. It is not a simple 'let's laugh at the out-of-touch-with-reality celebrities' story, though; by taking certain behaviors or character traits of more ordinary folks to the extreme to make a point, this is also a cautionary tale about the risks that can go along with blind deference to fame or social status.

AW's favorite scene was right at the end, when an Italian character confesses his deepest sin. In a story dotted with shortcomings of various intensities and unpleasantness, the secret revealed as most shameful was so true to character and believable it provided the perfect comedic endnote.

What Doesn't: Apprentice Writer has observed that often, a person's greatest strength can also be their weakness. She has long admired this author's skill at with multiple point-of-view characters, the a heroine/villainess juxtaposition often being the most enjoyable aspect of the story. In this case, the reader entered the thoughts of a rather staggering number of characters - male and female, mature and teenaged, financially advantaged and financially exploited, talented and wannabe, shifting across three countries - such that this reader suffered occasional moments of head-hopper exhaustion which led at times to lack of connection with the character de page. Reflecting on this narrative choice, it occured to Apprentice Writer that it may have been intended as a statement on the fleeting nature of fame and how one barely comes to recognize a new star before his/her face is swept away on the tide of new up-and-comers. So, she will give benefit of the doubt and call this a clever nod to the reality of all the 'beautiful people' out there struggling to make their living from their appearance.

The second thing that made AW say 'Huh?' was the opening point-of-view. None of the three primary characters, nor even one of the 'main' (if that's the correct word) secondary characters, but a minor (AW is going to call it tertiary) character who then disappears for a long stretch. This confused her, used as she is to the current fictional convention of opening with either the protagonist or antagonist, and therefore feeling in a holding pattern of anticipation that that tertiary character would enter the scene again at any moment. It took quite some time to clue in that that wasn't going to happen. Again, once she thought about it, AW could appreciate that the scene was actually a bullseye choice for a story about, duh, beautiful people: a top executive for a modelling agency who is eternally on the lookout for the next 'It' face spots one in the wild (i.e. on a London street). AW will further admit that she really enjoyed the funny twist, wherein the executive is stunned when the boy to whom the traffic-stopping face belongs is indifferent to being discovered, and runs away. It was like the fish story of talent scouts. AW slotted it in under 'Who says the rule of opening with a main character can't be broken?'


But does it make you laugh? YES
This is a classic Holden tale, with eccentric ensemble cast and lots of changes of scenery. Another novel perfectly suited to the beach bag or airplane carry-on from the queen of contemporary social satire.


GIVEAWAY!
Who's your favorite 'beautiful person' and why?

Comment for a chance to win 1 of 2 copies of 'Beautiful People', then come back tomorrow for Q&A with the author to double your chances!

The Fine Print:
1. U.S. and Canadian addresses only, no P.O. Boxes please.
2. Leave a non-spammable way to get in touch if your profile doesn't lead back to an active blog.
3. For bonus entry, follow here or on Twitter (MayaWriter) and let me know.
4. Contest closes on 7 May 2010.

Interesting to read your comments on the head-hopping since we recently discussed it. I don't think I've ever read a book that had as many switches as what you describe here. I recently read a book that I really enjoyed (Almost Like Being In Love) and there were only two head-hops but even still I could lose track of whose head I was in. That ends up being a really hard thing for me as a reader as it distances me from the characters. I definitely like it better when the delineations are very clear. (course, maybe I'm not very bright and that's why I keep getting confused;)

Rachel - Haha! I'm going to go out on a limb and guess that the problem isn't your degree of brightness.

This story is in 3rd person rather than 1st so the name of the individual concerned is always very clear, not Sarah Monette's dark fantasy 'Melusine' series or Lori Lanssens literary fiction 'The Girls' that relies on very different character voices to distinguish first person POV.

First of all, you know I'm going to comment on the cover. The colours are gorgeous.

My favorite Beautiful Person is actually Vivien Leigh. How can there really be a 'why'? Everyone's concept of beauty is radically different. As for currently living Beautiful People, Aishwarya Rai is so stunning it's breathtaking. Strangely, the two actresses I find beautiful are also gifted at their craft, and I have no doubt that puts them into a more beautiful category for me.

Sounds like a good real M. I'm liking this blog too. We should have coffee some day.

Sounds like a great book. And I am going to say Grace Kelly. While she is not of my generation. She just embodies such a classic look.

My favourite beautiful person is Jon Bon Jovi. He is awfully good looking and has certainly been aging well, but he is also such a conscientious individual with his charitable organizations, etc.

Princess Di wins the title, but I also like Robert Downey Jr...

My favorite beautiful person is my mother. She came from a foreign country not speaking the language and made a life for herself.

This sounds like a really good book!
My favorite beautiful person is my daughter. She brings so much joy to my life! vivaglampink@yahoo.ca

I do enjoy Wendy Holden's books so much! Please enter me. My favorite person is probably Audrey Hepburn. She was not only beautiful outside but beautiful inside with all her good works.

@Julia - Aishwariya Rai! I know! I have the hugest girl crush on her, and Penelope Cruz - my votes for most beautiful women in the world today

@Sherry C - The principle of having coffee is good, but I hope it's OK if I drink tea instead *g*

@SHG - thanks, as always, for your support!

@Pam - hooray for first mention of a beautiful male person! And I agree, Bon Jovi is aging very well. Looks better now that in the big hair days IMHO

@Moziesme - and beautiful man #2! I am also charmed by RDJ and glad he seems to have taken charge of his life

@Kristen - I agree, Audrey Hepburn was a stunningly beautiful person.

My favorite beautiful person is definitely Elizabeth Taylor.
Thanks,
candc320@gmail.com