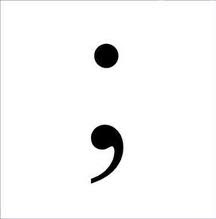 She is therefore grateful to Signor Aldus Manutius, an Italian printer who way back in 1494 invented the picturesque little symbol that still lends so much drama to sentence rhythm and so much frustration to grammar teachers who one and all feel it is used incorrectly, all the time.

And hooray for people who appreciate them, such as comment poster/poet Ozzie Maland over at emdashes.com who wrote

'Ode to a Semi Colon

Thou art the fairest mark of all;
Thy graceful curve and stellar dot
Would e'en the singing lark enthrall:
Who'd spurn thy use had better not.'

Since the upside down question mark is already claimed by Spanish-speakers for standard issue questions, perhaps a sideways question mark? A reverse question mark followed by a regular one to form a question mirror image?

Good point about the rhetorical/sarcastic punctuation mark. I must say though, I am impressed with the ingenuity of online people to express their voice and tone in writing. There are many options, beyond emoticons.

crap. I tried to add monica geller after the "I know!"in tag marks, but blogger tried to outsmart me by omitting them.