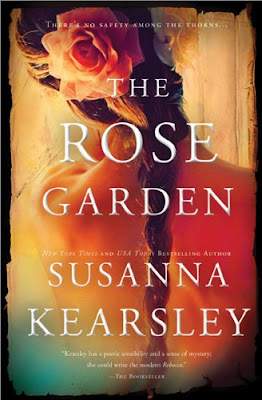 Premise: Grieving contemporary woman returns to childhood Cornwall home and begins travelling back in time to an era of smugglers and uprisings.

Cover: Title - very pretty, but held more significance for the contemporary portion of the story than the historical. Would have liked it if a title had been found that was equally significant to both time periods.
Art - Lovely, and much more eye-catching and also fitting than the art on the ARC Apprentice Writer received, which put her in mind of a story of a brave cancer survivor or some such. This one shows a titular rose, colors that recall the sepia tints of old daguerrotypes, and features hair (in a style which could be historical or contemporary) as the central element - so right for the story. Very well done.

What Works: The author has above average writing skill and an engaging style which draws the reader into the story, an effect which is further enhanced by use of first person and sympathy the reader feels for the protagonist from the first page as she talks of how bereft she is following the death of her beloved older sister.

The choice to have the protagonist keep going back and forth between time periods, as opposed to leaping close to the start and spending the bulk of the story in the past/future, with a final leap back to own time at the end, created a great contrast between typical daily life challenges of average people now (setting up a new business, keeping on old one viable, negotiating dating life) and typical life challenges then (having to be watchful of local law enforcement due to no recourse to higher authority, political choices that can mean swift and bloody death no matter which side one comes down on, gender inequality that placed any female without male protectors with enough muscle and in close enough proximity at risk, the sheer labor and difficulty associated with tasks of daily life).

Finally, a great strength of this book is the historical love interest. How Apprentice Writer adored him, his relationship to his brother and best friend, the way he chooses to deal with economic and political reality of the time, but most of all, how he responds to a woman with modern sensibilities. He was swoonworthy, and AW would have been happy to read more about his backstory and what happens next to him. He gives Jamie Fraser (of the mega timetravel hit "Outlander) - who is #2 on the list of best romantic heros of all times, as compiled by fellow Sourcebooks author Sarah Wendell ("Everything I Know About Love I Learned from Romanc Novels" review to come shortly), a run for his money. If anything, Daniel Butler comes out ahead, considering Jamie's unfortunate disciplinary episode (cue groaning of the "Outlander" faithful).

What Doesn't: In AW's view, if you going to write a timetravel, then do the reader the courtesy of not treating the actual timetravel element like a trivial afterthought. In this case, the explanations of where and to whom it happened were tepid and unconvincing (because the conditions for both should have affected many, many more people than it did) while the explanation of why it happened at some times and not others was never given. The fact that the protagonist seemed to show such little curiosity about the mechanics of the thing gave this reader an ever dimmer opninion about her intelligence. It also made her WILD that in contrast to, say, Henry of "The Time Traveller's Wife" who cannot take anything with him from the old place (including clothes) when he shifts, the protagonist here could, but never thought to do so. You can bet your sweet petticoat that AW would have taken care to have a supply of toothpaste/brush, dental floss, aspirin, swiss army knife, and feminine hygiene products with her at times.

Apart from the personal grooming aspect, AW was very surprised at how the protagonist never thought of the possibility of some small gift for the two historical men who literally risk their lives for her, given that having other people of their time seeing her appear or disappear would brand them as associates of a witch. There is a whole subtheme of capacity to create fire (in the form of skill to strike a spark), thus symbolizing access to light, life-giving warmth, capacity to eat, and feeling of security - all of which the hero and his best friend continually bestow on the heroine. The hero even shows special interest in the future invention of matches. But does the heroine think to slip a lousy book of matches for him in her jeans pocket, or some small modern kitchen gadget in recognition of her adopted brother's culinary interest? Not at all. This willingness of the heroine to accept all the tangible and intangible gifts offered to her by these men without any notion of return created an uncomfortable sense of imbalance, all the more peculiar considering the extravagant gift she bestows on some secondary characters in the contemporary time.

Overall: The single word previous reviewers seem to apply most often to this novel is "haunting"; AW would agree with that, as well as the "well-written" description. The story is more about the psychology and emotion of the person going back and forth in time rather than the action-adventure (such as found in "Outlander") or the modern time luxuries/olden time privations angle (such as found in "Confessions of a Jane Austen Addict"). From this perspective, the feelings and actions of the cast of characters was (with exception mentioned above) convincing and satisfying.
Posted by M. at 10:53 AM