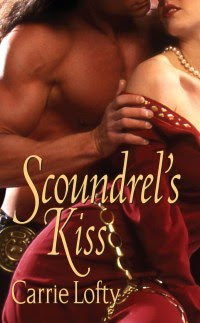 
Premise: English scholar battling addiction and warrior-turned-monk battling inner and outer foes are thrown together in the complex environment of medieval Spain.

Cover: Title - Short, references author's previous 'What a Scoundrel Wants' title, blessedly free of words 'wicked', 'sin' and 'Duke' = not bad at all. Art - Will Scarlett is surely revolving in his literary grave. Here it is, the rich, saturated red that should have graced his own story's cover, one book too late. So while the actual elements give a true picture of what to expect (cover lady's complexion convincingly British-pale, cover man's complexion convincingly mixed extraction, his grip on her equally interpretable as lovingly passionate or monumentally frustrated), the irony is uppermost.

What Works: Carrie Lofty is a fearless author. Not only does she choose unusual time periods and places (Robin Hood's Sherwood Forest, Spain at a time of uneasy back-and-forth control between Christian and Moorish forces), she makes her heroines stand far apart from commonplace historical female characters. Meg (of the author's wonderful debut book) was smart, resourceful, and seeing-impaired in a world without benefit of Braille or seeing eye dogs. Ada, her sister, made a none-too positive first impression in Meg's story (based on her treatment of Meg) and opens her own story grimly negotiating with an unsavory character about terms of payment for the opium she needs to stave off imminent withdrawal symptoms. An addict heroine? Can she be believably redeemed to the point the reader roots for her happy end?

She can and is, but not before some very dramatic moments for herself and the aspiring monk tasked with curing her as a condition for his ultimate acceptance into the order. Gavriel is a wonderful figure, made up of opposites that threaten to tear him apart even before Ada complicates his life: born of two worlds and fully accepted in neither, possessing a strategist's brain but denied all education but that intended for warfare, struggling to atone for past actions by pursuing a spiritual path yet having nigh insurmountable roadblocks and temptations thrown in his way. Ada, who first acts with disdain towards others and denial about her own condition (with the reader unable to yet distinguish if these are features of her own personality or a symptoms of her addiction) becomes like a fuse to his powder keg: she will, without question, speed him either to heaven or hell. Apprentice Writer's favorite scene between them was when he kicked a very specific psychological crutch out from under her, forcing her to make a choice without any excuses or pretense that she does not know the consequences of each potential decision before her.

What Doesn't: AW had the good fortune to visit Spain (including Toledo, which makes an appearance) and fell in love with the country - meaning she couldn't wait to plunge into the story. To her delight, a wealth of small details skillfully woven into the narrative provided a glimpse of a fascinating place and time, where the pressures and realities of frontier life and opposing world views battling for dominance led to the easing of social rules practiced more strictly elsewhere. AW confesses to longing for more; she felt greedy for a greater taste of the Spanish backdrop. The fact that this hunger was not satisfied is not a flaw of the book; it rests with two unalterable facts: 1. Commercial fiction operates within strict (*cough* stingy *cough*) wordcount parameters, and 2. If the back blurb and title didn't give it away, the clinch cover certainly would; this is not historical fiction. It is historical romance, with emphasis tightly on the relationship.

AW will have to resign herself to the options available for her Spanish fix: a) seeking out more historically oriented fiction, b) petitioning publishers to increase future wordcounts for Ms. Lofty, and c) daydreaming within the pages of tourist brochures. She'll get right on all three.

Overall: Another entertaining and emotionally satisfying foray into a fascinating pocket of history as seen through the eyes of a unique author. With Ms. Lofty soon branching out into the apocalyptic genre and holding craft workshops all over the place, Apprentice Writer hopes there will be time in her busy schedule to tell the stories of Jacob, Ada's erstwhile Jewish travel companion with hidden depths, and Blanca, the appealling young Spanish woman whose rescue of Ada leads to her own first taste of independence.

Learn more about the author here , here, and here.

The Fine Print: Apprentice Writer purchased her copy of 'What a Scoundrel Wants', and won a copy of 'Scoundrel's Kiss' from 'The Season' blog.

Great review! Both of these are on my TBR wish list. I'm a definite fan of commercial romantic fiction bursting out of Regency ballrooms and London townhouses.

That does sound like a a fun one. Thanks for the review.

As always, I enjoy your reviews! And I've heard good things about Carrie Lofty's work.