Q & A and Giveaway: CIJI WARE 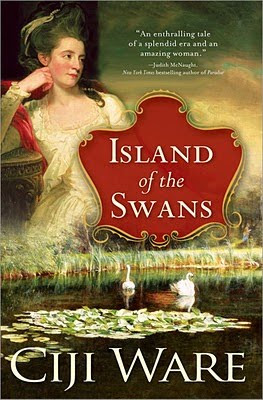 First things first: the cover. Did you have input about art? Did you choose the title?
Yes, I chose the title Island of the Swans. On my first of five trips to Scotland researching the book, I visited the picturesque Loch an Eilean - which means 'Swan Isle Lake' - where this story, based on true events, takes place. Coming up with the title was the easy part; what was more difficult was tracing the events of the heroine's life, about which no full-length, serious biography had ever been written. And for the first time in my 25-year career as an historical novelist, I was awarded cover approval in my contract with Sourcebooks Landmark. However, let it be said that other than suggesting that their staff have a look at the wonderful Romney painting of my heroine, Jane Maxwell, the 4th Duchess of Gordon that hangs in the Scottish

National Portrait Gallery, all the credit for the stunning cover must go to my publisher's wonderful art department. When the cover proof arrived, and I saw they'd incorporated the portrait, I literally burst out crying as the image of the Duchess and the swans depicted below it was what I'd always imagined in my mind's eye. I guess you can tell: I was thrilled!

I agree, the cover is lovely. What comes to you first? The hero? Heroine? Ending? Well, in the case of Swans, I had a great grandmother who claimed we were descendants of the Duchess of Gordon way, way back in our family history. I was drawn to the story of this fabulous eighteenth century 'woman of fashion' who was also known as 'The Matchmaking Duchess' because she managed to marry off her five daughters to, respectively, three dukes, a marquis, and a baronet, thereby alligning herself with the most powerful families in the British realm. Not only that, one of her two sons was to inherit the Dukedom of Gordon, and the other became the Marquis of Huntley. I was fascinated to learn of a woman wielding significant political influence in the tempestuous times of the British involvement in American Revolution, and besides, there was also the compelling story of an aristocrat caught in a love triangle for three decades with two men who both wanted her desperately. What more could an author ask?
Sadly, after five years of research, I could never prove without a doubt that my McCulloughs had married into Jane Maxwell's family a few generations before her birth in 1749. Oh well. So much for the family lore. I had fun dressing up like my heroine when giving my stump speech: 'In the Footsteps of a Scottish Duchess'.

What fun to dress up like that, and how tantalizing to imagine a direct link, proof or no!
My favorite scene comes late in the story when the Duchess is in process of arranging a marriage for one of her children, and turns a situation intended to form her ultimate humiliation on its head so it becomes a triumph. What was your favorite scene in the book?
My absolute favorite scene has to remain a secret or it will spoil the plot, but certainly one of my other favorites is when Thomas Fraser of Struy, lately returned from the Black Watch regiment serving in the American colonies, sees Jane again as the newly-minted Duchess of Gordon and demands she meet him secretly at the ruined castle at Loch an Eilean.

What does a typical writing day for you look like? Has it changed since Book #1?
I now have eight books under my belt: six historical novels and two non-fiction works. When I'm working on a book, I treat it like a job at the telephone company. I punch in at nine and work until three or so, and then again, a few hours in the evening if I can grab them. I don't make lunch dates, and I pretty much drop off the radar for awhile. I think being fairly disciplined about putting the seat of my pants on the chair and my hands on the keyboard is in my DNA. Now that my son is grown, educated and married, this schedule has loosened up a bit, but still, writing is the way I pay my light bill; it's not a hobby. I put in the hours in order to get the pages to pile up.

How does your family feel about you being an author?
Speaking of DNA, I am the daughter, niece, granddaughter and many greats' descendant of writers going back to William Ware who wrote the historical novel Zenobia published in 1889...and Henry Ware who published books of his sermons as a minister and academician in Boston in the early 1800's. I think my family would have given me grief if I hadn't become a writer. My husband of thirty-three years, Tony Cook, is a former financial journalist (now internet marketing guru) who was writing for Forbes and Money magazines when I met him, so basically, writing is the family business!

Your best writing habit?
I'd have to say my sense of discipline is my best asset.

Worst writing vice?
I don't write - I rewrite because I tend to use three adjectives when one or none would do . I studied Latin for four years and still fight the overwhelming desire to use too many clauses when a simple sentence would be preferable. Balancing this is my ability to be a cruel and heartless editor of my own work.

Social Networking: Wolf in Sheep's Clothing or Blessing in Disguise?
Despite my husband's profession as an internet guy, in the beginning of the social networking revolution, I saw it as the most tremendous time-suck in the world. Now I embrace it - used judiciously - as a fantastic tool to reach the readers who want to connect with the kind of historical writing I do: (I hope) rich, entertaining tales about extraordinary women set in times past, but also stories replete with the 'telling detail' that only deep-delving research can produce. If it weren't for the internet, books like Island of the Swans would perhaps not find an audience in a world dominated these days by short, pithy posts on Twitter or zippy text messages. I am one grateful writer that there is such a thing as social networking and that my new publisher, Sourcebooks Landmark, is one of the few print publishers who totally 'gets' how important electronic media is and sees around corners as to how it is already impacting the delivery of what we writers produce.

Nightstand inspection! What was the last ____ you read?
Contemporary: Bruce Lipton's nonfiction 'The Biology of Belief'
Historical: Tasha Alexander's 'Tears of Pearl'
Paranormal/UF/Fantasy: Does seeing the latest Harry Potter film on an airplane count? (haha!)
Mystery/Suspense: Jaqueline Winspear's 'Among the Mad'
Kindle: Kathryn Stockett's 'The Help'

Who is your writing idol and why?
I have two: Daphne du Maurier and Anya Seton. Both wrote straight historicals and also what we'd call paranormals today. As a young reader, I was totally swept into the worlds they created, and grew up wanting to write just like them. My third idol, if I'm allowed, is Jane Austen, naturally, whose characters will live as long as there is storytelling, be it print, drama, or some medium not yet invented!

Which literary character do you wish you'd thought of first?
Scarlet O'Hara, but I also loved Amber in Forever Amber. I definitely admire uppity women.

Best piece of advice for aspiring writers?
If you write something every day, in 365 days you'll have a book.

Anything else you'd like to share with Apprentice Writer's readers?
For a couple of years I taught the ten-week course 'Writing the First Novel' at the UCLA Writer's program. Each year, 15-20 students would fill my classroom, and in all that time, only 2 ever later finished books they'd come to class to jump start. One got published. I believe that many more would have landed between covers if only the writers had enough faith in themselves and perseverance to get to 'the end'. And also, once they got to the end, to go back to page one and look for ways to make it even better. My other two-bit piece of advice to budding writers: Show your work only to people whose literary judgement and experience you trust and, most importantly, show your work-in-progress only to people who wish you well!


Thank you so much for your time and insights, Ms. Ware!
Next upcoming title will be A Cottage by the Sea (late spring 2010)
and A Race to Splendour (2010)

Sourcebooks Landmark has generously provided 2 copies of 'Island of the Swans' for AW readers. Leave a comment on this Q & A for your chance to win a copy, and double your chances by commenting on the review posted earlier.

Excellent interview! I relate so much to the rewriting thing. The way I spew out the verbiage during my rough-drafting phase, my inner editor has to be utterly merciless.

STUNNING cover. I imagine that will draw many a reader's eye in the bookstore.
Enjoyable interview, ladies. Thanks for sharing your process.

TL - I'm a rewriter/pruner too. I have to laugh whenever I read about authors who have to pad their first draft to up the wordcount.

Wylie - thanks for dropping by! the cover is even more beautiful IRL

Enjoyed the interview. I'm glad to see that soemone else has trouble with being a bit verbose and has to go back and prune. ;-)

What a fabulous Q&A, M! Very nice to meet you, Ciji, and very much appreciated advice. No wonder you had such a reaction to your Island of Swans cover - it's gorgeous.

Wonderful interview! I have been hearing so many good things about this book. Please enter me.

Please enter me for the giveaway. I'm going to go comment over on the review as well.

Comment to Ciji: I'm grateful for social media, too. Without Twitter, Ning and other book-related blogs, I never would have found out about you or Sourcebooks. Yay for guys like your hubby!

I really enjoyed reading the interview andI would love to read this book!
Thank you,
mittens0831 at aol dot com

I have problems with overwriting just for my thesis! I imagine I would have even larger problems with fiction. Thanks for the contest!
teagirl1 at telus dot net

I very much enjoyed reading this interview. I found it especially interesting that the author taught a class at UCLA on how to write a first novel!

Please enter me in the giveaway! I commented on the review post, as well.