Laughter Reviews #29 - KEEPER - "HOW TO TAME A MODERN ROGUE" 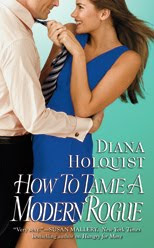 Premise
Opposite personalities must co-operate to maintain a historical fiction for the sake of a medically fragile senior.

Cover
Eyecatching, attractive turquoise color, playful couple (reminiscent of Julie James' covers) not really indicative of much of content - but Apprentice Writer gives extra points for the fact that the male is not only clothed, but wearing cufflinks. What really works is the clever title - alluding to both time periods involved, and tweaking hot-button terms in the genre.

What Works
A whole lot, actually.

Beginning with the epigraphs (you know - those little snippets some authors use to crown their chapters to give readers a hint about what's about to happen). AW is a sucker for epigraphs, and these are really good. The author has quoted from the fictitious historical tome 'The Dulcet Duke' (that title alone makes AW grin), and the language and scenarios are pitch perfect.

Next, the hero. Loved him. Loved his strengths, believed from the beginning that his flaws had a good reason (they do) and would be overcome (they are), loved the way his mind worked, most especially loved the way he made AW laugh. He regularly doesn't even pretend to listen to the heroine, and rather than seeming obnoxious and male chauvinistic, it comes off as cheeky and funny (isn't the most frequent female complant about men that they never listen?). And the way he goes about transforming himself, and figuring out what it is the heroine really needs was genuine and endearing.

Great secondary characters? Got 'em. A wonderful senior character (of which there are too few in fiction - at least, the books AW has been reading), and an exotic mystery man - not to mention his horse - lend charm and substance.

Believable, zippy writing? Got it. One of the things that irritates AW no end are covers/and or descriptions of heros that are ONLY achievable through many, many hours a day spent at the gym plus ingestion of banned substances, with the actual day-to-day hero activities including at most a mild gallop through the park or a round of golf. This hero is a dedicated soccer player, and the sport has signficance throughout the story. AW's household is a soccer-watching one, so the references to 'elbows', the descriptions of how the players interact with each other, and the process of demasking the mystery man were all very well done in her eyes. Another place that got the checkmark for 'mission accomplished' was the way the hero and heroine recover from the so-called 'Black Moment' (when they each believe the relationship is doomed). The way they built their road back to each other was charming and apropriate to the big picture.

What Doesn't
This question led to a whole philosophical debate for AW, as she has always considered herself the type of reader for whom a heroine need not be likable so long as she is interesting. This belief was tested. The heroine starts out stiff, somewhat self-involved, judgemental, and not especially convincing in her profession as school teacher, considering her erroneous belief that penguins live at the North Pole (junior apprentice writer #2's animal habitat project taught AW that the polar opposite is correct) and her deficiencies in basic courtesy towards the hero - something one would think is second nature to professionals trying to drum the essentials into young skulls. At several points, the hero asks himself why he's attracted to her, and in the beginning this reader echoed the question. Which led to another: why was AW more forgiving of the hero's flaws than the heroine's, and more ready to believe they would be overcome? Is she harder on protagonists of her own gender, and if so, why? She did not arrive at an answer, but thankfully, by the end of the book, the heroine has indeed transformed, and AW liked and was rooting for her well before the HEA came along.

Overall
A wonderful example of how a book with a known ending (it WILL be happy, even though in between both main characters think it won't) can nevertheless be non-formulaic.

But does it make you laugh? Yes, yes, yes
Anyone who has read a number of romances, of whatver time period, will delight in how certain recurring situations and stereotypical language are gently, lovingly, and effectively mocked. One word: rippling.
HIGHLY RECOMMEND

Celebrating Book Blogger Appreciation Week, Apprentice Writer is delighted to host her first ever giveaway for a new copy of HTTAMR, courtesy of the generous people at Grand Central!

The Fine Print:
1. Tell Apprentice Writer of a sport you either love or detest that was mentioned in a novel, and the title of that novel.

2. Be sure to leave a way for AW to get in touch with you.

3. For an extra entry, come back tomorrow and leave a comment on the Q & A post with the author.

4. For another extra entry, tell AW whether you participated in BBAW, and if so in what way.

Hi :)
Thanks for the great giveaway & a great blog post.
In Tessa Dare's Goddess of the Hunt, she writes about hunting (which I don't like but is important to the plot of the book).
:)
All the best,
@RKCharron
xoxo

No need to enter me, AW. I'm dropping in to say thanks for the e-mail. It's good to meet you!

I've got this posted at Win a Book.

Hello, RK Charron! I've just started GOTH and am enjoying it so far.

Hello, Susan Helene Gottfried! Thanks for your help.

I don't read many books that involve "sports"...I am scanning through my mind trying to come up with one.

The closest things I can come up with is horse racing - which I can enjoy on occasion - and I know I have read "Seabiscuit".

I really enjoyed your review and the author interview!

Thanks for the giveaway.
bsyb100 at gmail.com

Thanks for stopping by.

4. I visited, I blogged the assignments, I hosted giveaways, I'm still visiting!

1. Tell Apprentice Writer of a sport you either love or detest that was mentioned in a novel, and the title of that novel.
How about Quidditch? I think it would be an awesome sport to play!

2. Be sure to leave a way for AW to get in touch with you..its below

4. For another extra entry, tell AW whether you participated in BBAW, and if so in what way.
I did participate. I did a quiz, posted the button, etc

oops forgot to say Quidditch is from the harry potter series

In To Rescue a Rogue by Jo Beverley, the hero practises a martial art to combat the pull of an opium addiction.

I didn't participate in BBAW except to visit a lot of other participants, and I also voted at the originating site. But I'd love to participate next year.

Froggie - how nice to see you outside of the Writerspace chatroom! Now I know your site I'll visit.

Book Dragon - steeplechase, that's one I wouldn't have come up with! Imaginative choice.

Julia - I actually read that book, and had forgotten about the hero using martial arts exercises as a component of his therapy.

I really can't remember a book that particularly mentions a sport, this one mentions soccer and I don't like soccer.

Thanks I hope you'll still enter me.

I think you are absolutely right. The man is clothed, the cover appropriate even to the cufflinks, which is refreshing. I don't have to see naked men to see the point of the book.

I'm going to put a link on my site, which is a place to find contests, I've been doing it for a while, every time I find one I like I list it for my friends. So easy peasy!

Please count me in. Thanks for the giveaway. I am reading The Vampire Academy and she is running. I don't really like to run much.

I loved finding all new blog during BBAW.

Brenda - thanks for visiting! actually liking the sport isn't a requirement *g*

Bethie - hello! I'm not much of a runner either.